The Schizophrenogenic Mother by Kartar Diamond 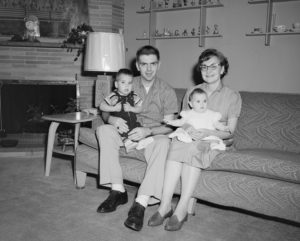 What is the “schizo-phreno-genic” mother?  This is a term that was used many decades ago to describe the personality disorder, attitude and detrimental actions of the mother who produced a child with schizophrenia.

Supposedly, this was a cold, unaffectionate mother, who also micro-managed her child and the result somehow blamed for the severe mental illness in her offspring. This notion about how and why people develop schizophrenia was eventually retired since it was proven not to be true. It caused needless harm within the struggling family and the National Alliance on Mental Illness (NAMI) did a lot to educate the public about this misnomer.

Schizophrenia is a neurological brain illness, which produces a persistent thought disorder and many other symptoms, including hallucinations. In fact, schizophrenia is now recognized as a cluster of symptoms and it is genetically based.  All across racial, ethnic, and socio-economic lines, schizophrenia exists in roughly 1% of the population world-wide. Many more are predisposed to having schizophrenia, but those who develop it have had something trigger it: be it environmental influences, drug use, or stress (like an overwhelming work load in college).  No one knows exactly what makes it manifest and in the case of identical twins, if one twin has schizophrenia then the other twin has a 50% chance of developing it also.

The same era of psychiatrists who promoted the concept of the “schizophrenogenic mother” are the same graduating class who believed that cold, unaffectionate mothers also turned their sons gay.  This may seem laughable in this Day and Age, when we understand that sexual orientation is also genetically pre-determined.  And yet, there is still a persistent attitude in the much older psychiatric circles that schizophrenia is caused by bad parenting.  Fortunately, most of these older psychiatrists have retired or will pass away soon and take with them the very harmful theory they foisted onto innocent mothers, grappling with their child’s emerging or chronic illness.

Because of some of these deeply erroneous notions within the field of psychiatry, it is no wonder that many people have mixed feelings about whether psychiatry helps or harms some individuals and their families. This is not to say that children who are abused come out unscathed or that stress from dysfunctional family upbringing doesn’t cause psychological harm; it most certainly can and does. But schizophrenia is the result of major deviations and disruptions in brain development, usually around the time of puberty. It is just as likely that a child who came from a loving, supportive family will develop schizophrenia as someone who lacked having a good family upbringing.

Schizophrenia may skip a generation or two, which is why it seems to “come out of nowhere” for some families and it was probably also left undiagnosed in some cases in generations past. As an example, I have a grandfather who died before I was born.  I heard almost nothing about him except that one time he pushed his wife down the stairs. It certainly sounded like he was a mean man at the very least.  But could he have had some underlying mental health issues?  No one ever referred to any of my distant relatives as “crazy Uncle Mel” or “loony Aunt Miriam” so there is no reference point, no one with schizophrenia in the family tree that we knew about.

In the olden days, people used to sometimes whisper that a person had a “nervous breakdown” and needed to “go away for a while.”  I suspect those nervous breakdowns were psychotic episodes, but people did not speak openly about these stigmatized family secrets. Because of what happened with our family, I know and advocate with many mothers of sons or daughters with schizophrenia.  Not only are they warm and loving people now, I am also confident that virtually all were affectionate, attentive, psychologically stable individuals when raising their children.  My own son used to refer to himself as my ‘mini-me,’ and we have always been close and connected, even in our darkest hours.

Kartar Diamond is a Mental Illness Advocate and author of Noah’s Schizophrenia: A Mother’s Search for Truth.