He Came In With It-A Book Review by Kartar Diamond 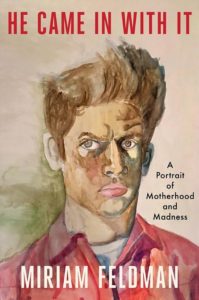 He Came In With It: A Portrait of Motherhood and Madness by Miriam Feldman

Before sitting down to review of this memoir, I read over some of the praises by others. The author’s writing style is so engrossing that she deserves a very unique review from me and I’ll strive not to be redundant. I approached He Came In With It from the perspective of also being a mother with a son who has schizophrenia, and also as an author who just published my own memoir about the same topic.   What would we two mothers have in common?  What would be different and would anything in her story shock me?

Some parts of the Feldman-O’Rourke story were eerily familiar. Having a son nearly the same age as my son, also taking place around the same time in Los Angeles, and even driving down the same streets (while being Jewish), I felt like her sister-in-spirit in a mentally ill parallel universe. Miriam continued to create beautiful art work through every crisis with her son and as readers we get to experience her breaking heart juxtaposed against her astounding attention to detail, taken in by all five senses. Her sixth sense is also on display, intertwined with the absurd choices we moms are forced to make for ourselves and for our sick son or daughter.

As with other families where schizophrenia emerges, the mother blames herself and scours her memory for signals or clues leading up to her child’s first psychotic break. We see a child with so much artistic or intellectual potential, but frozen as time marches on, bypassing them in regret of what could have been.  So much in common, Miriam and I even used a few of the same expressions to vent our frustrations, we both mused about other cultures and periods in history when mental illness was seen more as a spiritual gift and on page 244 she finally made me cry. We have both lamented the loneliness and isolation our friendless sons have endured, with only one high school romance before the illness took over.  Mothers of schizophrenic sons know they may never have a daughter-in-law or grand kids. Their lives do not resemble any conventional rites of passage and this is something we have to accept.

As she struggled to understand what was going on in her son’s mind, readers get an amazing description of what the author was thinking, feeling, seeing, hearing, touching and smelling, knotted up in pain, humor, fear and resignation. The author paints a gorgeous picture with words and it is one of the best mental illness memoirs I have ever read.

She also shares with us how she struggled in her relationship with her daughters and husband, at times as precarious as the relationship with her son Nick.  There are actually many gifts in having a mentally ill loved one in your life and Miriam narrates it eloquently.  This tragedy forces us to prioritize what is important and helps put everything else in perspective. All of her revelations, terrifying, self-deprecating and hysterically funny, give hope to other parents and the inspiration to soldier on.