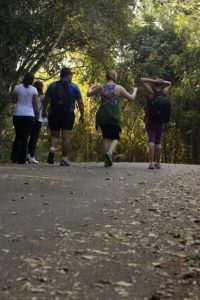 The subject of using natural approaches for mental health issues is complicated.  First and foremost, we may not have a willing participant when referring to someone with SMI (serious mental illness).  An unfortunate component of SMI is that many people, especially those with schizophrenia, lack insight into their illness.  When you have a segment of the mentally ill population who does not believe they are ill, taking any kind of supplementation or natural approach could be rebuffed as swiftly as taking prescribed medication. They would feel there was no need.

In fact, even when a person with SMI is suffering in some way physically or mentally, they may not be agreeable to even testing out either a natural solution or a pharmaceutical option. They may not even be curious about the correlation between how they feel and what they are eating or doing to contribute to their discomfort. As an example, my son was encouraged to walk 30 minutes per day. He complained about getting over-heated when walking in the hot afternoons, but refused to try walking in the cooler morning hours or early evening. Common sense goes out the window sometimes.

Most agree that exercise can be just as effective at managing depression as any medication or nutritional supplement.  There are also herbs and other natural approaches one can take in conjunction with prescribed medication, as long as there are no relative contra-indications.

It would be a challenge to take too much Vitamin D, but there is a whole field called Orthomolecular Nutrition, where mega-doses of some nutrients, like Niacin, are recommended.  Meg-doses of anything would need to be monitored and factored into what else the person may be doing or taking as prescribed.

Altering a person’s mood or energy level with natural approaches is not likely to eliminate the more serious or chronic positive and negative symptoms of SMI. And yet, if a person is willing to eat healthy, exercise, and add some natural super-nutrients to their diet, it can only help.  Ditto for meditation or other mindful, reflective practices.

One of the keys to success is making an appeal on a seriously mentally ill person for their benefit.  A family member or caretaker can make an impact in how the natural approach can be as good, or better, than only prescription medication.  One important feature to natural approaches that that they usually don’t have any negative side-effects. When a person with SMI masks their feelings and perceptions, it may take a while to know if they can commit to doing something which takes effort, like exercising, or quit doing something harmful, like smoking. Many moons ago I wondered if I should even bother encouraging my son to eat healthy, after he became a heavy smoker.  The mom voice inside reminded me that if he’s a smoker, then it is actually even more vital for him to eat healthy and exercise, to counter the harm he’s doing with the cigarettes.

Many people with SMI are in fact receptive to trying anything which will give them more energy and ability to focus, but like all of us, it can take a while to establish a routine with new commitments that take time.

From the Noah’s Schizophrenia Blog Series