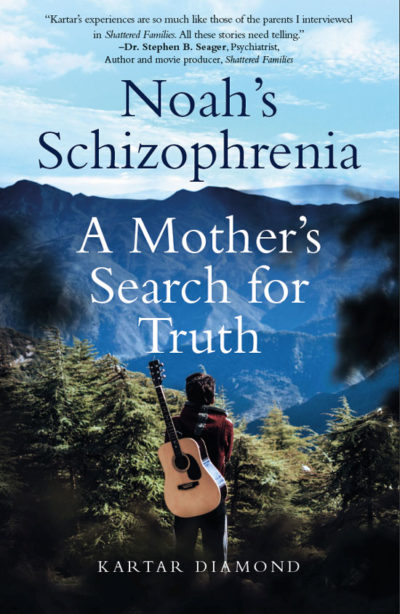 The author recounts her and her son’s experiences over a thirteen year period, after his schizophrenia emerged at age fifteen. Mother and son go through a myriad of set-backs and insults, dealing with the dysfunctional mental health care system. It will shock the reader and give them a front row seat into how hard and heartbreaking it is to get competent professional help, even in the wealthiest country in the world. This memoir guides and consoles other family members, coping with the tragedy of their loved one having serious mental illness.

After reading Noah’s Schizophrenia, the general public will better understand how schizophrenia traumatizes not just the person with this brain illness, but also their family members who are the main caretakers (usually the mother), and who typically fight an uphill battle advocating for their loved one. Readers who are policy makers or professionals in the mental health care industry will realize they should utilize family members as part of the recovery plan, instead of shutting them out of the process.

Instead of delivering only statistics, this true story puts a human face on the toll which schizophrenia takes, and will help generate more activism on behalf of those who don’t have the ability to advocate for their own cause. When the author speaks in front of law enforcement as part of their Crisis Intervention Training, the officers tell her that Noah’s personal story has completely changed how they will handle mental health emergencies in the future.  The author is painfully candid, sharing both mistakes made and triumphs, so that fellow family members can avoid the same land mines in dealing with mental health care providers and seek out the resources available in their community.

The author includes conversations she has with her son as a fascinating backdrop to how he thinks and perceives the world. They are often in stark contrast to his disturbing behaviors.

Anyone with a loved one experiencing mental illness will identify with this memoir, especially the parents of those with schizophrenia. Schizophrenia plagues about 1% of the population. Just in the United States alone, that means that over 3 million people with 6 million mothers and fathers trying to cope with this tragedy.

Siblings and other extended family members bring the total amount of people directly impacted by schizophrenia well into the tens of millions, not to mention 150 billion dollars yearly in health care costs. Schizophrenia is still so stigmatized, that family members often suffer in silence, developing their own PTSD, anxiety and depression because of their overwhelming circumstances. It can be very therapeutic just to know that you are not alone and the practical advice is also invaluable.

Psychiatrists, psychologists, nurses, social workers, case managers, peer coaches, in-patient and out-patient staff and coordinators, Board and Care operators, mental health court judges and many others in the field can all benefit by a holistic understanding from the parent’s perspective, in how their decisions and actions can hasten or delay the stability of their patients.

While there are many sincere and expert mental health care professionals, some are handcuffed by the limitations of insurance coverage or arcane laws, preventing them from even using their own skill set optimally. Others have been misdirected into believing that parents are to blame; Noah’s Schizophrenia gives many examples of how that stereo-type needs to be retired if we truly want to see more successful outcomes.

Inquisitive and intuitive people working in the mental health care industry will read this book to give them additional insight into the family dynamic. They may already sense, and just need a little more validation, that input from and collaboration with parents could be a game-changer in their own effectiveness as a professional in the field.

With rising homeless populations, more people needing government assistance, alarming numbers of mass shootings, and overflowing prisons, the general population from all walks of life is starting to realize that socio-economic reasons are only part of the equation. Un-treated mental illness is a big part of the equation and everyday people are now taking an interest in this chronic public health emergency. We can’t have too many citizens demand that their local, state, and federal officials make the accessible treatment (and sometimes involuntary treatment) of mental illness a priority.

Over 20% of the general population has experienced some form of intermittent or less debilitating mental illness than schizophrenia. Post-traumatic stress disorder, anxiety and depression are fairly common compared to 1% of the population who are seriously mentally ill and often lacking insight. Most people know someone with a serious mental illness and this memoir will be attractive to readers who want to understand schizophrenia in layman’s terms. Even friends of family members are curious about this brain disease, but are afraid to ask certain questions deemed too personal. Noah’s Schizophrenia: A Mother’s Search for Truth can fill that void.

Diamond’s compelling narrative reminds parents they are not alone in experiencing grief, witnessing horrifying outcomes resulting from an inadequate healthcare system, and stigma around mental illness. Told in Diamond’s raw and authentic voice, she demonstrates the indefatigable spirit of heroic motherhood, seeking evidence-based information, researching the legal system, and never, ever losing precious hope to keep moving forward.
~ Mary Widdifield and Elin Widdifield, M.A., Behind the Wall: The True Story of Mental Illness as Told by Parents.

In Kartar Diamond’s heart-breaking journey with her son’s schizophrenia, she educates others, both lay and professional, how it affects those living with it as well as their family members. I attest to the importance this memoir. Noah’s Schizophrenia: A Mother’s Search for Truth should be required reading for both experienced mental health professionals and those considering the field.
–Shelley S. Hoffman, Advocate (for Daniel’s Place, Santa Monica), NAMI Family Support Facilitator and Family-to-Family Teacher

Ms. Diamond encounters one painful experience after the next with her schizophrenic son, but with resolve faces these obstacles head on. She describes both the typical and extraordinary perils, when thrown into the world of mental illness.
–Ed Elhaderi, Author of Nomadic Soul: My Journey from the Libyan Sahara to a Jewish Life in Los Angeles, and NAMI Facilitator for the Family-to-Family Course.

“Kartar’s experiences are so much like those of the parents I interviewed in Shattered Families. All these stories need telling.”
–Dr. Stephen B. Seager, Psychiatrist, Author and movie producer, Shattered Families

Science offers approaches to spectrum psychotic disorders that make them manageable; every person with serious mental illness deserves that care. Diamond’s journey with her son is, unfortunately, more of the norm than the exception. The more we speak about this injustice the more likely will we be able to change the status quo.
–Dr. Robert S. Laitman, Co-Author of Clozapine: Meaningful Recovery from Schizophrenia

Kartar Diamond’s memoir, Noah’s Schizophrenia: A Mother’s Search for Truth, gives constructive descriptions of the experiences many parents have as they struggle to cope with a loved one whose life has been undermined and marginalized by schizophrenia. This book is so helpful to family members who face similar problems finding appropriate treatment and residential care for a mentally ill person.
–Robert Paul Liberman, M.D., Distinguished Professor of Psychiatry, UCLA School of Medicine

In Kartar Diamond’s memoir, she generously shares insights, framed in an intimate and life-affirming look at the dark and light sides of the special but very difficult relationship with her son. Noah’s Schizophrenia is a call to action to address the global pandemic of indifference and downright prejudice towards the mentally ill and their families.
–Devorah Cutler-Rubenstein, President of Noble House Entertainment, Inc. Co-Author, Dating Your Character… A Sexy Guide to Writing for Film & TV

I recommend this book, not only as a guide and support to those who have a loved one with mental illness, but also to their friends and relatives, to provide a better understanding for all involved.
–Kathy Zimmerman

Noah’s Schizophrenia is one of the most insightful publications I have read to date, as it shines a light on serious mental illness, the “system”, and treatment failures in our state. The reader gains a clear understanding of what works and what doesn’t work in the treatment of our mentally ill populations.
–Jim Farell, Founder & Director of the Orange County LPS Conservator Assistance Group

Kartar’s exhausting, heartbreaking, unrelenting efforts to save her son documents just how broken our Mental Health system is. Noah deserved early intervention and a continuum of care. Kartar deserved to be heard and taken seriously. When someone has cancer, there is treatment and support for the patient and their families. When they have a brain illness, they are left to their own devices to navigate a system that’s been broken for decades. Noah’s Schizophrenia should be required reading for the Powers That Be in this country who have ignored the plight of those suffering from these illnesses and their families for far too long.
-Jeanne Gore, Coordinator & Steering Committee Chair – National Shattering Silence Coalition (NSSC), Mom of loved on with schizoaffective disorder