Siblings of Those With Mental Illness by Kartar Diamond 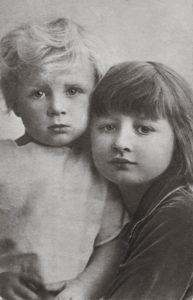 Each family member has a unique relationship with their loved one who has mental illness. When I was frequently attending NAMI Family Support meetings, the vast majority of people in attendance were mothers.  Second to that we would see fathers and once in a blue moon a person would attend who was struggling with a mentally ill parent. This is always very sad to witness, when the parent-child roles are reversed, but of course this also happens with elderly parents and their grown children, even when mental illness is not a factor.

Siblings are also tremendously impacted by having a brother or sister with mental illness. In some cases, a very responsible and involved sibling will take the upper hand in a caretaker role, especially when the parents are elderly or when parents are still in a state of paralysis over the trauma this causes throughout the whole family. Sometimes, because of cultural upbringing, parents may be in denial about their son or daughter, where the second generation sibling will not relate to the stigma as heavily and be more willing to seek out help on behalf of their brother or sister.

The issues which siblings have to deal with are heart-breaking, not the least of which is “survivor’s guilt,” where the sibling can become depressed, just witnessing how their brother or sister cannot function normally and who exists in a nearly perpetual state of stress or danger.

When the sibling is younger, they may consciously or subconsciously resent all the negative attention that the mentally ill brother or sister is receiving, out of necessity, from the parents. Some siblings will even admit to resenting all the money being drained from the parents by their ill brother or sister. Most of the resentment however, has to do with the quality of relationships and the extra stressful time that parents devote to the troubled child.

In some instances, the sibling will be very compassionate toward their ill brother or sister, but still have to make hard choices in order to not have aspects of their own life ruined.  One time, we sat as a family support group, trying to help one young lady strategize the options for her upcoming wedding.  She didn’t want to invite her mentally ill brother to her wedding because he was unstable and very unpredictable.  Would her brother make a scene or do something embarrassing? Would he become drunk with an open bar at the reception?  Or would he just sulk and cause other guests to worry, taking away the focus on the bride and groom?

Each case is unique. Instead of simply not inviting the person with mental illness to family gatherings, one of the suggestions from mental health professionals is to start with the understanding that the ill family member may not be comfortable in loud, chaotic or large family gatherings for more than a brief period of time.  They may need to have a quiet, private room where they can retreat to, as a way to reduce anxiety for all involved.

Another time, our NAMI family support meeting listened to a new mother who was having a hard time bonding with her baby because her mentally ill brother was in crisis and no one else but she was taking responsibility for him. She was on the receiving end of disturbing daily phone call rants and she became too depressed to even enjoy her new baby. This just underscores how mental illness can have very detrimental effects on family members. Even complaining about these issues makes us appear selfish in comparison to the person who is actually suffering from the mental illness.

Often, we see a very strong sibling, who has accepted that they will never have a normal, loving, or reciprocal relationship with their mentally ill brother or sister.  They know that they have to take on the role of parent, social worker, “probation” officer or legal guardian, in order to help keep their loved one out of trouble and help them manage their mental illness.  This can be a thankless job and the sibling knows that many times they will be perceived as “the bad cop,” making difficult decisions on behalf of their brother or sister.  Siblings sometimes become conservators and Trustees, at the expense of having a more equal relationship without the tension of these challenging legal duties. Finally, some siblings, like their parents, may have to distance themselves from a brother or sister, for their own physical safety or in order to not be a constant punching bag for verbal abuse.

As the mother of an only son with schizophrenia, I have sometimes wondered what our lives would be like if my son had a brother or sister. Would a brother or sister have been better able to inspire my son to be less destructive and rebellious during some of our most difficult times? Would my son have been able to confide in a brother or sister with some positive outcomes because of that? Or would I be dealing with a second child, depressed about the plight of their brother or sister?  Would he or she be equally aggravated with me, judgmental about decisions and priorities I made?

Within the family dynamic, it is also common for there to be more than one child with a mental illness. When one (adult) child is higher functioning than their sibling, or whose mental illness is not as severe, just having a seriously mentally ill brother or sister can also cause more stress for the higher functioning person and at times drag them down as well.  No doubt, most siblings of a mentally ill brother or sister can benefit from individual or family therapy. These are burdens no one asks for or deserves.

Kartar Diamond is a mental illness advocate and author of Noah’s Schizophrenia: A Mother’s Search for Truth