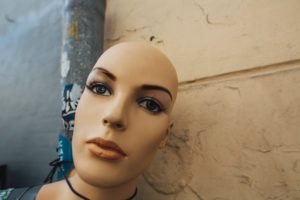 Capgras syndrome causes a person to have the irrational belief that someone they know is not who they really are, replaced by an imposter. Capgras syndrome can also be experienced by people with Lewy body dementia, Alzheimer’s, and Parkinson’s disease. Even anxiety could bring on an episode of Capgras syndrome. It may have a correlation with whatever part of the mind can make a person paranoid or not trusting, but taken to an extreme. The person experiencing Capgras syndrome may even feel that people they know well, like family members, are actually robots, not even another human being.

In the coming years when we have more artificial intelligence to interact with, this disturbing thought disorder might even get stimulated more in some individuals.  It reminds me of the classic paranoid delusion in which a person thinks that the government or some private entity is spying on them.  And now we know that is verifiably true, whether through Alexa, Facebook or the surveillance technology all around us. Your Smart TV might not be talking to you, but it could possibly be listening to you!

One friend of mine has a son with schizophrenia and he will look his mother over and check for the moles on her arms in order to be sure that it is really his mother who has come to visit him.  Some suggest that Capgras syndrome can be caused by a brain injury and this is quite plausible, especially if there is documentation that the onset of Capgras syndrome started directly after a brain injury.  I once dated a man who has what is referred to as “Face Blindness,” or Prosopagnosia.  He did fall off a second story balcony as a small boy, hitting his head, and that is when his Prosopagnosia began.  He learned quickly to recognize people by the sound of their voice and other non-visual details because he really could not recognize faces.

One time we went out to lunch and he had to excuse himself to use the bathroom.  When he came back, he first started to walk toward a table where another woman was sitting alone.  She didn’t look anything like me except for having brown hair. I waved at him and then he knew he was about to sit down with the wrong woman. I learned then that we take for granted how instantaneously our brains can put together thousands of pieces of information in order to recognize other people. I don’t recall asking him, but it must have been very mentally exhausting for him to watch a movie, where characters come and go on screen and he had to guess who they were before they resumed speaking.

My own son has never verbalized to me that he thought someone was an imposter although one time years ago he mentioned that he had a hard time believing some people were real. He specifically said it was hard for him to conceptualize that once a person left his presence that they were real or carried on with their own lives somewhere else. This almost seems like a version of Capgras syndrome because he is not sure if people are real, let alone, pretending to be someone else.

Additionally, there is probably a correlation with the fact that some people with schizophrenia do not always know how to interpret the facial expressions of others. We take for granted that most of us learn very early in life how to read all kinds of emotions on others’ faces. If people are smiling at you, or if they are indifferent, but you think they are mad at you, this alone would be very anxiety-producing. This topic illustrates one reason why some people in the mental health field are advocating for schizophrenia to be re-classified as a neurological brain disorder and not just a mental illness. With mental illness, we know a person can be genetically pre-disposed to having it, but there is still a prevalent assumption that it remains dormant unless brought on by environmental factors outside the person’s own innate physiology. Re-classified as a neurological brain disease, it may help increase funding for research and cures.

Kartar Diamond is a mental illness advocate and author of Noah’s Schizophrenia: A Mother’s Search for Truth